I have already been writing about my dive outside Koh Samet (Thailand) back in April 2006 – a dive where we spottet at huge bluespottet stingray – the size of the stingray was a bit more than 1, 5 meter for the body….
On my second dive outside Koh Samet the divemaster Theep suddenly reacted and turned around to me holding something looking like a small sea snake…..  I did of course take some pictures of this little snake or?
But no, a bit of Googling and the mystery isnt that much of a mystery anymore – the small fellow is a Pipefish (Syngnathinae) who is part of a subfamily of small fishes, which in fact is in family with the seahorses.
The Pipefish does in fact look a bit like a straight-bodied seahorse with its tiny mouths, right? 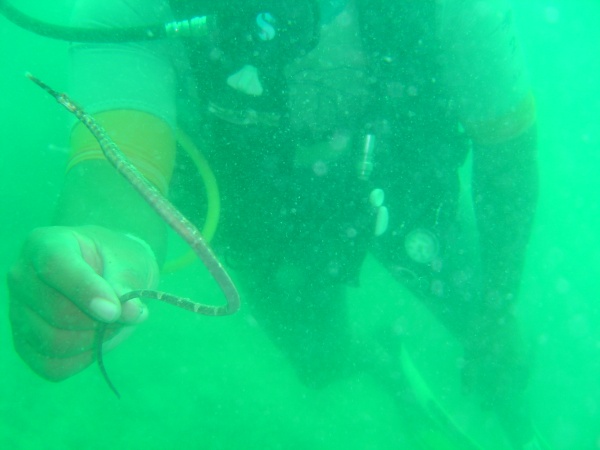 I have already been blogging on my personal blog klintoe.org about this huge bluespotted stingray I saw in April outside Koh Samet, Thailand, but I do think that it deserves to be on diveblogging.com, too.

Back in April 2007 I was some days at Koh Samet and why not test the dive situation there?
So I went out diving one day and it was pretty good. The visibility was from pretty good to bad (3 meters) because of the tide and it gave a lot of particles in the water, but the rather shallow dive sites were really nice. Koh Samet is certainly also a place to take a couple of dives when your there, but I wouldnt make it my only dive spot on a Thailand trip…
I went diving with Ploy Scuba Diving and Dive Master Theep…. and his guys were great! Thanx!
Theep was very honest and did in fact warn me about the visibility in April and I had the dives alone with him – great service. We went out in their speedboat at 13 and were back around 16, a nice way to do it!

On one of the 2 dive the great thing happened – we suddenly we found ourselves on top of a resting bluespotted stingray – a huge bluespotted stingray!! its pretty difficult to see from the picture, but this big guy had a body a little more than 1,5 meter in diameter and then comes the tail… Theep went close to it an touched it just a bit… to make it move a little… 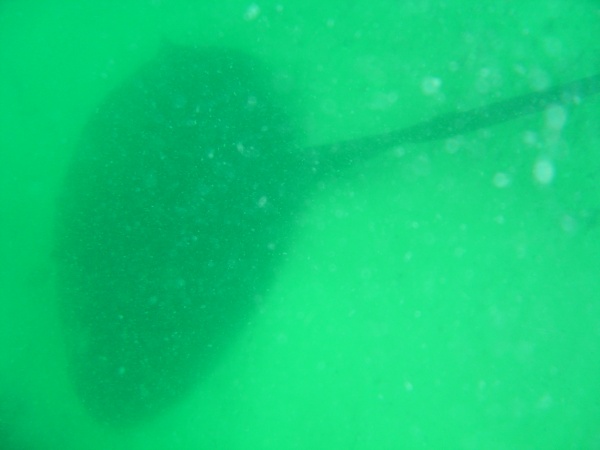